I get the same exact error message if I attempt to set the two monitors to their max resolution, and then arrange them side by side.

A couple of retarded workarounds are to move the second monitor below the first, as apparently the complete desktop resolution of the two combined at this arrangement is accepted.

Through some testing I found that the max Desktop Area width seems to be 4000, and I am going to guess the max height is also 4000. It is not a total area calculation either, as I can arrange the monitors in such a way as to use more total screen area than the normal arrangement would, and that is allowed.

Seems to be something that limits it to 4000.

Another things that worked for me, is to rotate my second monitor so that it is vertical, this reduced the width enough to make the resolution acceptable. This doesn't work very well for me, as my second monitor looks very bad vertical due to the viewing angle design of the monitor.

I found that you can forcibly set the resolution via the xorg.conf however, this doesn't work. The section of the screen area beyond 4000 becomes corrupted.

You need to define your 2 screens in AMD soft. 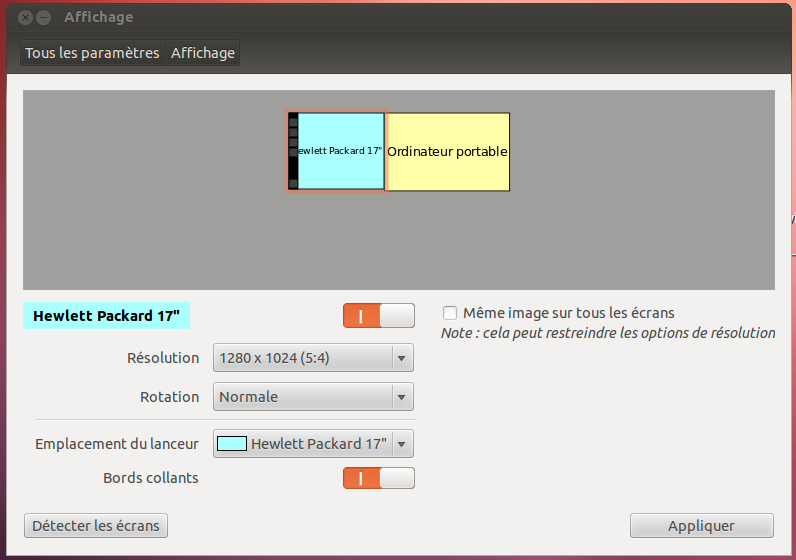 There are two solutions I've found to the same problem.

Solution 1. Disable proprietary driver. Reboot. Now go to Settings > Displays and uncheck the "mirror displays" box. You may also wish to alter the "launcher placement" setting so that you have one launcher on one monitor, not an additional one on the 2nd monitor. You may also wish to disable "sticky edges" so that your mouse won't catch when moving between the two monitors.

Solution 2. This is a clarification of Boris's answer who recommends using the AMD/ATI control panel, but his image was in French and there are more details needed. If you're really set on running the proprietary driver, open AMD Catalyst Control Center (I use the Administrative version, not sure if that's required or not). Then you'll need to set the two monitors to have nothing to do with each other... not mirroring, and not multi-desktop. Just single. Then reboot. THEN in the next page down in Catalyst Control Center's option pages, enable Xinerama, and reboot again.

In some cases the latter solution doesn't work. For example in my current situation, something wasn't allowing me to dissociate the two monitors... they kept getting forced into cloning. I was allowed to change the setting, but as soon as I closed the application the setting was lost.

Latest (v12.4) directly from AMD's site fixed this dual monitor resolution issue for me. I have HD4850. I presume that Jockey is offering older version.